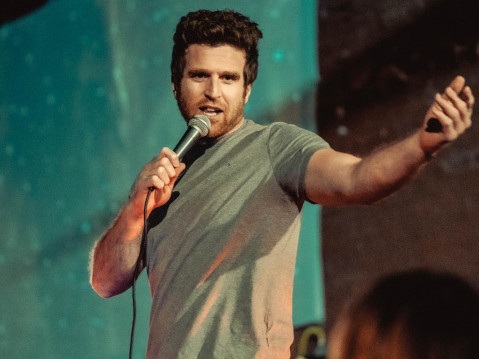 Comedy Night is back and better than ever! With a new show format and top-tier comedians, this is not a show to miss! Mo Mandel is headlining with Cameron Peloso opening the show! All ages are welcome but show material is geared for 18+.

Best known for making over 40 appearances on CHELSEA LATELY, and his own HOUR SPECIAL on AMAZON, Mo has made numerous appearances on CONAN, THE LATE LATE SHOW, has a half-hour special on COMEDY CENTRAL, and is a recurring guest on popular podcasts such as ADAM CAROLLA, BERTCAST, YOUR MOM’S HOUSE, and THE FIGHTER AND THE KID.  In the past, Mandel has also guest starred on such hit shows as MODERN FAMILY, CASTLE, HAPPY ENDINGS, and was one of the leads of NBC’S comedy FREE AGENTS, opposite Hank Azaria and Kathryn Hahn.  Most recently, Mo created and hosted a special for THE DISCOVERY CHANNEL called SMALL TOWN THROWDOWN. He is also the creator of the hit series, COMEDY KNOCKOUT, which can be found on truTV and HBOMAX.